Christmas and New Year with Furtheron

Hello all.  Sorry I’ve not posted much lately – I’ve been a bit of a bear with a sore head hibernating away for the winter really.  Just lost my writing mojo – I really didn’t seem to have anything much to say.  Or did I just not want to talk about it because I might have to face up to something?  Who knows – “Be true to thine own self”  – yep still the bloody hardest part of the AA programme for me.  I may not lie to others these days like in the good old drinking days but I’m still great at weaving a splendid trail of nonsense in my own head for me to believe.

The Friday before Christmas Daughter-of-Furtheron was in a car crash.  Only a minor one but she took a bit of a blow on the side of the face as she was smacked against the side window (she was a passenger in the back of a car that was t-boned by someone who was clearly not paying any attention to the road at all!).

Son-of-Furtheron arrived home on the Saturday before Christmas in the wind and rain.  We then had another car crash virtually on our doorstep as two guys both decided to accelerate into the gap that is the slalom course through parked vehicles in the roads around us.  I was advising the guy who’d clammbered out of the car that was the worst damaged that he best stay for the police to talk to him.  He told me to “Not tell him what to F***ING do” and ran off.  I stupidly chased him – I ended up embarrassed covered in mud, dying for lack of breath when I returned to tell the Police “He got away”.  They took the car reg, called it in, then another guy turned up saying he knew the guy and I id’d him to the Police off a picture on Facebook.  Why did I chase him?  I just looked stupid and that really burnt in me.  I’m 51 – chasing a 20something was just stupid!

Day before Christmas Eve we had a big storm – pulled some tiles off the roof which we couldn’t get fixed until after Boxing Day and it rained a fair bit – I was worried of further damage and leaks.  Stupid, there were people near us flooded out and losing everything I’m overly worried about some tiles I end up having a stupid row with my Mother-in-law.   Stand back – my M-i-L is a demanding character – she is also a fairly depressing person.  My poor wife (only surviving child) does get very very exasperated with her.  Normally I deal with her on things like finance, hospitals etc. as I have more patience.  Sadly it snapped and I was hugely ashamed of what I said to her – she may be ungrateful, rude and I dislike intently much of her political view but… she has a right to be wrong and I should just let her and gracefully bare the needs of supporting her to help my wife.  It ended up on Christmas Eve with my wife having to broker a peace truce between us so we could have Christmas Day all together.

Christmas Day was ok – frosted start due to my row with M-i-L but I quickly apologised, she accepted and we kissed and got on with it.  I’m pleased we did.  Standard Christmas for us.  I cooked the Turkey and pan fried the Sprouts this year (a hit with everyone).  We all had far too much to eat etc.  Mrs F bought me this… 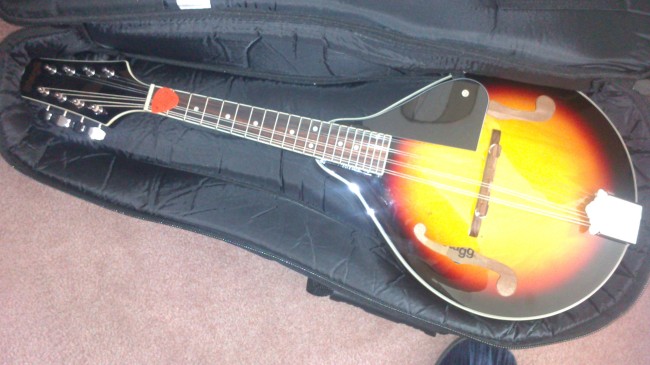 A Mandolin!  Cool.  By 10am I’d learnt G, C and D and figured out Dsus4 and Dsus2 so was away.  Still learning but enjoying it – it may appear soon in my recordings 🙂

I got some CDs, BluRays, jumper etc.  All good stuff.

Between Christmas and New Year we did little – just down time all together until my son headed off back to Birmingham then onto North Wales to be with his partner for New Year at her parents place.

New Year was just Mrs F, D-o-F, her boyfriend and me.  D-o-F had gone out for a meal and a drink but they were back before 9pm and nearly asleep my midnight!  Blimey at her age I was getting drunk like a lord and having those drunken half hearted fights with people or trying to get off with that girl who… oh hang on… by the time I was a year older I was with her mother!!!  Whatever – it was nice and quiet and we were in bed not long after 12:30!

New Years Day we replaced our old family meal with a family tea at our place.  Remember my recollections of my Mum’s bungalow full of people and kids and tables straining under the load of food no one really needed but politely filled their plates with?   We recreated that atmosphere perfectly – it was lovely and poignant as well – now my sister and brother are grandparents I realise we are where my Mum was in those days ourselves now.  The circle of life and all that…

So it started with me stressed, angry and snappy and ended with me more relaxed, happy and nostalgic.

I’ll talk more on that in another post probably…

P.S. Thanks to all who contributed to my Charity Single appeal – I’ve raised £170.  It is still open for a few more days if you want to buy early for next Christmas!

Music and guitar obsessive who is a recovering alcoholic to boot
View all posts by furtheron →
This entry was posted in Uncategorized. Bookmark the permalink.

7 Responses to Christmas and New Year with Furtheron